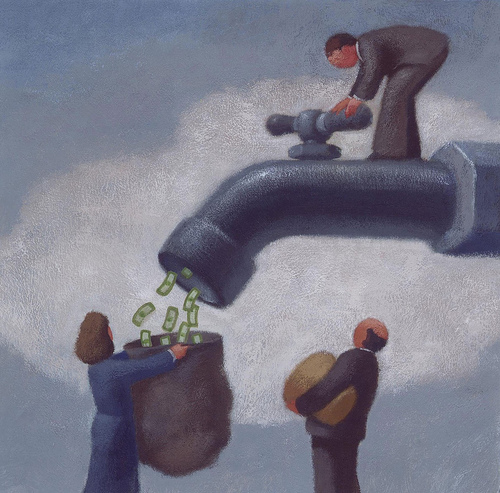 A third that transcends and recreates both

The mainstream economy is stuck in depression. See this, this and this.

Our problem basically is that we have a very distorted economy, in the sense that there has been a significant recovery in our limited area of the economy amongst high-income individuals…

Large banks, who are doing much better and large corporations, whom you point out and everyone is pointing out, are in excellent shape. The rest of the economy, small business, small banks, and a very significant amount of the labour force, which is in tragic unemployment, long-term unemployment – that is pulling the economy apart. The average of those two is what we are looking at – that they are fundamentally two separate types of economies.

Put another way, the top .1% are currently acting like parasites, stealing the money from the rest of the population.

And perhaps most importantly, consumer confidence – and Americans’ confidence that their government is doing the right thing to fix the economy – is extremely low.

Largely because the rule of law has broken down, and fraud is so rampant – and is actually sanctioned by the government – that it has become “the business model” of Wall Street. And see this.
In short, people no longer trust the economic system, which makes an economic recovery impossible.
So people aren’t spending, but are instead “keeping their powder dry” until the rule of law and free markets are restored. People know – either consciously or below the surface – that we have socialism for the rich, and that the little guy doesn’t have a chance. See this, this, and this.
Under such circumstances, people will not spend.

Is There A Solution?

We can’t get out of this depression until trust is restored and consumer spending occurs again. Trust and spending won’t happen unless the rule of law is followed. But the government refuses to enforce the rule of law or to prosecute most of the Wall Street fraud, partly because Washington D.C. has been bought and paid for by Wall Street.

So we’re stuck in a seeming catch-22.

But maybe we can build our own economy. Yes Magazine has a new article out entitled:

Who’s Building the Do-It-Ourselves Economy?
Corporations aren’t hiring, and Washington is gridlocked. Here’s how we take charge of our own livelihoods.

We – collectively – have enough money in our personal stashes to be able to grow a vibrant economy. If we held our own money, we wouldn’t need the big banks. Public banking could also really help us obtain credit to grow our local businesses and economies. But the big banks (and Federal Reserve itself) are exerting tremendous pressure to kill any public banking movement.

But the government at times cracks down ruthlessly on alternative currencies … going so far as to label them a form of “domestic terrorism”.

Moreover, there is a growing consensus that – since there is simply too much debt in the world to repay (much of it fraudulently incurred) – the debt should simply be written down. See this and this. However, the bondholders are fighting that idea with tremendous lobbying efforts.
So the large organizations – perhaps with the best of motives – are trying to keep us trapped in the dysfunctional, debt-based system.

As professor of social anthropology – and debt expert – David Graeber points out, we don’t really need debt and money as such:

The big question in the origins of money is how a sense of obligation – an ‘I owe you one’ – turns into something that can be precisely quantified? Well, the answer seems to be: when there is a potential for violence. If you give someone a pig and they give you a few chickens back you might think they’re a cheapskate, and mock them, but you’re unlikely to come up with a mathematical formula for exactly how cheap you think they are. If someone pokes out your eye in a fight, or kills your brother, that’s when you start saying, “traditional compensation is exactly twenty-seven heifers of the finest quality and if they’re not of the finest quality, this means war!”

Money, in the sense of exact equivalents, seems to emerge from situations like that, but also, war and plunder, the disposal of loot, slavery. In early Medieval Ireland, for example, slave-girls were the highest denomination of currency. And you could specify the exact value of everything in a typical house even though very few of those items were available for sale anywhere because they were used to pay fines or damages if someone broke them.

But once you understand that taxes and money largely begin with war it becomes easier to see what really happened. After all, every Mafiosi understands this. If you want to take a relation of violent extortion, sheer power, and turn it into something moral, and most of all, make it seem like the victims are to blame, you turn it into a relation of debt. “You owe me, but I’ll cut you a break for now…” Most human beings in history have probably been told this by their debtors. And the crucial thing is: what possible reply can you make but, “wait a minute, who owes what to who here?” And of course for thousands of years, that’s what the victims have said, but the moment you do, you are using the rulers’ language, you’re admitting that debt and morality really are the same thing.

If Graeber is right in his claim that modern ideas of money and debt came from warfare and slavery, if the large banks and their “bought and paid for politicians” continue to block public banking, and if the IRS is going to tax barter transactions and block alternative currencies, what can we do to escape the clutches of the wealth-extracting system we currently have?

Graeber hints at one possibility:

[French anthropologist Marcel Mauss] was one of the first anthropologists to ask: well, all right, if not barter, then what? What do people who don’t use money actually do when things change hands? Anthropologists had documented an endless variety of such economic systems, but hadn’t really worked out common principles. What Mauss noticed was that in almost all of them, everyone pretended as if they were just giving one another gifts and then they fervently denied they expected anything back. But in actual fact everyone understood there were implicit rules and recipients would feel compelled to make some sort of return.
What fascinated Mauss was that this seemed to be universally true, even today. If I take a free-market economist out to dinner he’ll feel like he should return the favor and take me out to dinner later. He might even think that he is something of chump if he doesn’t and this even if his theory tells him he just got something for nothing and should be happy about it. Why is that? What is this force that compels me to want to return a gift?
This is an important argument, and it shows there is always a certain morality underlying what we call economic life.

In other words, in communities or webs of human interaction which are small enough that people can remember who gave what, we might be able to set up alternative systems of money and credit so we can largely “opt out” of the status quo systems of money and debt measurement.

I’m not arguing for becoming Luddites and living in mud huts (but that is fine, if you wish to do so). Nor am I suggesting that we all have to become selfless saints who give away all of their possessions without any reasonable expectation of something in return.

I am arguing that it might be possible to empower ourselves – and create our own systems for keeping track on a local or people-centered basis, and create our own vibrant economies using the resources we have – by moving away from the national and global systems dominated by the biggest banks and oligarchs, and towards a system where we “spend” resources and goodwill into our local communities in a way in which trust is built from the ground-up, and the energy of trade and commerce can be re-started.

Postscript: Mainstream economists will argue that we need a universal, fungible type of money in order to trade on a global basis. But because currencies are now unpegged from anything in the real world and are traded on the currency markets, their values fluctuate wildly in the modern world. In other words, one of the essential characteristics for money – that they represent a universal, fixed yardstick – has disappeared. And fiat currencies have a very short lifespan. So how valuable are they, really, for anyone but forex speculators?