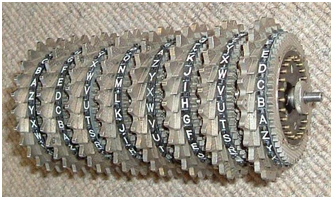 These raises will be used to prototype and implement the PorTex protocols.

We are raising $2,211,030,000 through issuing Utilitokens and Currents to develop the underlying projects.

This seeds the PorTex and starts up the underlying PorTex design teams.

The fiat exchange value is structured to double every raise round as the PorTex Projects activate and become implemented.

A Portex was originally a British cipher (crypto) machine.

Mainly used by the British secret services from the late 1940s to early 1950s, the civil version was generally black and used eight rotors.

The rotor concept is about linking and smart-railing aligned teams, blogs, training, projects, communications….to connect together in a corrected pattern.

So we can decode solutions.

Dimension Zero is the Portex archetype.

Reduced competition and predatory behaviors by shifting the foundations of human contact and contracts.

Optimizing flows of wealth across the planet at local and global levels through right distribution of value and values.

Incentives for people to focus on meaningful activities and sharing useful products and services with lessened negative social and environmental impacts.

The name has to be connectable on a personal level. Going back to what we all share, the Sun and Soul. So Solamids. A “Stablecoin”, the Base Unit of Account for calibration of:

Solamids are not a Commodity or a Currency, but a Stable Measure of Worth. They do not circulate but rather hold place for the value of the Currents so they can freely circulate.The various kinds of currents are measured by it. This is the foundation of a beneficent exchange system.

Only one Value Reserve, electrical energy is universally produced and consumed with the scale and resolution to valuate the full scope and implications of any human endeavor.

We already measure electrical (currents) flow in tremendous detail and is already central to every economy and almost every process.

Solamids are elemental, timeless and universal. A Solamid is the same value representing the same potential now as centuries ago or  centuries in the future. Fiat and crypto currencies lack this qualifying quality.

Solamids can be a huge step forward in stabilizing and rationalizing the economic process at every level. Financial Stability is a key factor in our Civilizational pivot.

Solamids form bedrock rational measurements allowing accurate and stable valuations. Fluid Functionality to represent any scale of asset or transaction. – Sola’Reserves will emerge from this platform.

Blocks speculation on Commonwealth Worth.

A natural crowdsourcing redistributing of responsibility by assessing scales of inner and outer costs for all products and their creative processes and including this into the pricing mechanisms.

Costs formerly passed to the environment and the human psychic dimension accounted for in all production and included in the Currents Cost.

A record of underlying social assets, like trust resultant from interactions between people. We generate Reputokens in order to build Reputation Currents.

Co-efficient value benefits go up as Reputoken value increases or as it decreases as damaged, forming an opening or closing of opportunity.

This is not similar at all to impositional statist schemes presently the rage. This coefficient is rather determined by reflective crowd valuation.

Each Zero Sources the Whole in their own way, a Source Point from where Wholo’Currents flow.

Due diligence, mint, Introduce and monitor the distribution and redeeming of Commodity Reserve Notes, Innerprise Reserve Notes and Transtructural Reserve Notes issued through CoXexus NetsWorth Teams. They are validated through the Human and AI Holo’Trusts.  This is for the purpose of tokenizing into acceptable notes for creating more trading and buy/sell liquidity in local communities. Included here are commodities, assets, R&D  projects and infrastructure development

ColabraCurrents and Holo’Notes are gig valued depending on complexity and skill and circumstances.

“Inner Wholomid” where Potential and possibility are Wealth Mapped.  Applied Genius for the Well-being  of The Individual Good across scale.

Leaders of Possibility are the Drivers of The New Wealth.

IperD Disbursements are automatically adjusted and credited. Instant transfer of value anywhere in a liquid form.

A Mutual Exchange Clearinghome meaning decentralized, to clear and transfer Currents and Reserves.

Call to Act and Create. The creative work that includes us and everyone. Participation Invitation – Coalesce  Wholo’Teams. Implement Formulas of contribution. Creative Service Generation.

We have passing beyond an age of scarcity and austerity. The challenge is not about solving problems of want, but building a sustainable possibility-based future that liberates us through Universal Enoughness.

Wealth shared as empowered capacity across scale. Compare with “Pyracapstoneization”.

Setting up Transvolution strategy centers. They can be founded anywhere under any condition. Homes, back of stores, caves, offices, prisons, anywhere.

These tie in and link up with larger hubs for distributing Locamid Currents.

Evolving a clear, positive and coherent identity for all Dimensions of Wholonomics so people internalize its context. Identity Tokens receive benefit Currents.

Connexteams are formed to facilitate Reserve Token and Current Generation and for large transactions.

Uses Human and AI smartchain technology to vet and prove up and issue Reserve Notes and referee large buy and sell transactions.

To change the course of culture our main power lies paradigm shifts, our greatest power. Shifting our mindset can go to the crux of any problem.

Nonviolent, effective and not stoppable, our greatest untapped answer to be free is free.

Complete development of the most advanced team methodologies anywhere. Currents purpose is to create cohesion within the groups and teams.

Wholonomics by shifting the paradigm of economics is a functional “Transvolution  of Civilization.”. Wholonomics activate fresh meanings that can function now.